Thank you to everyone who played this year’s 3rd Annual Stanley McLean Memorial Charity Golf Day, helping to make it a massive success with over £9,300 raised!

£5,300 has been donated to EACH where we will again be "Funding the Hospice for a Day” for the second consecutive year on January 2nd  2015, which would have been Stanley’s 4th birthday.  The remaining finds have been donated to GOSH where we are continuing to fund a portable Echocardiogram machine, which is a vital piece of equipment on the diagnosis and treatment of heart and lung conditions.

A huge thank you to our main sponsors who without we would not be able to make the day such a success.  Thank you to Intouch Systems for providing all the before dinner drinks as well as the large TV screen and audio equipment and a brand new laptop which was won by Helen Beck who was closest to the pin on the 6th hole.  Also thank you to the Dingles Motor Group for providing the hole in one car that all players had a chance to win as well as an amazing auction item of a Toyota GT for the weekend and a stunning food hamper.  And finally thank you to Sprowston Manor Marriott Hotel for providing a superb location, a great meal and fantastic service.

Our winners this year were Kevin Gooch, Sam Taylor, Dave Hewson and James Hazel who had a great night winning a number of individual prizes as well.  We had 26 teams take part and 118 join us for dinner where we were entertained by Aaron James, one of the coutries leading sports impressinists and comedians.  The auction items had hot bidding with the marquee items of a signed Gareth Bale Real Madrid top, a fourball at Woburn Golf Club, a 5 night stay at any of The Small Independent Hotels of the World and a fourball at London Golf Club all helping to raise over £4k from the auction alone!

We had some amazing prizes and thank you to everyone who donated including:

Thank you to all who sponsored a hole:

Finally a massive thank you to everyone who played, donated and took time out of your busy schedules to support this, our 3rd Charity Golf Day for GOSH and EACH in the memory of my son Stanley.  It means a tremendous amount to my family and myself, and I look forward to welcoming you all to next years!

Brad, Debbie and Gus
Posted by Unknown at 23:59 No comments:

After collecting all sponsorship money we are VERY pleased to announce that the sponsored walk that Becky organised in July raised a WHOOPING £1324.60!!!!! That is just so amazing! Thank you to all that took part and all that sponsored us.

The wonderful Becky, of cake sale fame, has organised another charity fund raiser. A sponsored walk around the beautiful broads of Norfolk on Saturday the 12th of July.

As all good walks should do, this one starts and finishes at a pub!  Meeting at the Fur in Feathers in Woodbastwick at 1.30pm we will begin to make our way around the broads on a leisurely 7 mile circular walk starting at 2pm.  With the guaranteed summer sunshine, warm weather and the promise of a pint at the end is there a better way to spend a Saturday?  And did we mention that the ice cream boat is meeting halfway?  Did you even know there is an ice cream boat!  That alone is worth the price of admission!

The keen walkers of the group can get first rounds in and once all the stragglers make it to the pub we can all look forward to a well deserved drink in the area that is reserved for our walkers.  Becky and the pub have also put a small menu together, so if you think you will be hungry then here are your choices:

Please note that the Pub have asked for pre orders and payment beforehand.


As this is to raise funds for Stanley's Trust there is a minimum sponsorship request of £20 per person, so your choice on whether you want to get sponsored or simply cough up the £20 yourself!   If you are interested in coming along to raise money for our two charity benefactors, GOSH and EACH, please email us at thestanleymcleantrust@gmail.com
Look forward to seeing you there!

Debbie
Posted by Unknown at 12:36 No comments:

"Pay for a day" at EACH Quidenham

After the huge success of Stanley's Golf Day in September we were able to 'Pay For a Day' at Quidenham Hospice with some of the moneys raised. We are the first family to cover the costs of running the Hospice for a day, donating £5,300 on the 2nd of Janurary 2014. We are very grateful to be able to give something back to say thank you, and being able to pay for a day on what would have been Stanley’s third birthday is a great way to remember him and celebrate his life.

You can read more about us donating to the Hospice here on the EACH website.

Debbie
Posted by Unknown at 05:23 No comments:

Sorry for the late writing of this post, we've been a bit busy in the McLean household recently after the birth of Stanleys baby brother in November!

I just wanted everyone to know how amazingly successful the bake sale was at the Norfolk and Norwich University Hospital on the 3rd of December, for the second year in a row. The lovely Becky Simmons, yet again, rallied the troops from A&E and got them all baking for the sale. It was a fab turn out, with tonnes of cakes, cookies, mince pies, cupcakes, rocky road, coconut ice, the list goes on! It didn't take long before it was a total sell out. 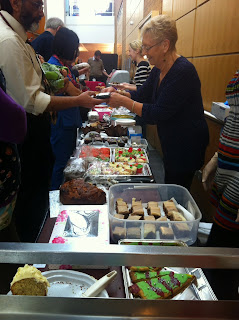 The bake sale ended up raising an amazing £507.63 for Stanley's Charity which just proves what great bakers the A&E department have!

Thanks again to Becky for organising it and to her Mum and Jessie for helping to sell all the yummy cakes on the day. A huge thanks to everyone who baked, bought and ate! 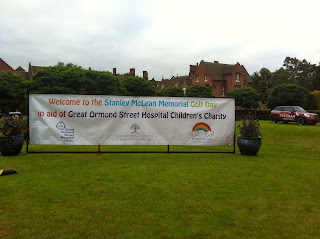 The 2nd Annual Stanley McLean Charity Golf Day was held on 20th September at the beautiful Marriott Sprowston Manor Hotel and Country Club with 30 teams of golfers enjoying the sunshine and great golf.  The golf course was in fantastic condition with many competitors commenting on the greens saying they were the smoothest and quickest they had played on all year.

The day started with everyone arriving for their bacon loin roll and receiving their welcome gift of a Brighter Future's Mug stuffed with Titleist Golf Balls and a keepsake Poker Chip Ball marker amongst other items.  Golfers from as far away as Derby, Northampton and Maidstone made the journey to join a number of local golfers including Sprowston Manor Members and staff for a fun day of on course competitions.

There were fantastic prizes to be had including nearest the pin prizes such as a laptop donated by InTouch Systems, Titleist Drivers and the chance for one lucky golfer to drive away in a brand new Mini from Cooper Norwich Mini.  Unfortunately nobody managed a hole in one but the cars looked great on the tee box and in the marquee during the dinner!
Woodfordes brewery donated boxes of Wherry Ale for all to enjoy as they went around the course, and Deb and Diane baked flapjakes, cookies and sausage rolls which were gone within 2 hours and raised over £100.  Local station Mustard TV showed up to feature one team of golfers whose total age exceeded 310 along with an interview and footage of the golf day which you can watch here .

The teams of four were competing for the Stanley McLean Memorial Trophy, team prizes, individual prizes and everyones favorite competition, the dreaded yellow ball.  Unlike last year nearly every team returned their yellow ball, which was a sense of enormous pride as no one wanted to be responsible for losing it!

After the golf all the competitors headed to the Norfolk Suite for the drinks reception sponsored by InTouch Systems and the chance to bid on the silent auction items which included great golf courses such as West Sussex and Burhill, a signed Norwich City Football top and ball, a signed Stuart Pierce photo montage, and many many more.  The bidding was fierce and friendly with groups of tables egging each other on to drive the bids higher.


A fantastic 3 course meal was served and in between courses prizes and raffles tickets were drawn and handed out, with the main auction items held until last where the bidding again was both comical and very successful, raising over £4k just in auction items.
The end of the evening saw the overall team winners handed out and congratulations to the team of Kevin Gooch, James Hazel, Dave Hewson and Sam Taylor who are the 2013 Stanley McLean Memorial Golf Day Champions.

Overall the day was a major success with over £10.2K raised so a huge thank you goes to everyone who played and donated so generously!

This money will go towards helping us to fund a portable echo machine at GOSH as well as fund the Quidenham EACH hospice for just one day, on what would have been Stanley's 3rd birthday: January 2nd, 2014.  Both Deb and I can think of no more fitting tribute to give back to GOSH and EACH in this way and we want to thank everyone who donated prizes, time and most of all played in the day and dug so deep.

I cannot wait for the 3rd Stanley McLean Memorial Charity Golf day on Friday September 19th, 2014 and hope to see you there!

Just over one week until our Charity Golf Day!

We now have 30 teams confirmed for Stanley's Memorial Charity Golf Day on Friday September 20th and with a target of £10.6k to raise we can now proudly let everyone know what that money is going to go towards.

The day that we have nominated to fund is January 2nd, 2014 which would have been Stanley's 3rd birthday.  We can think of no more fitting tribute!

With GOSH we have elected to put funds towards equipment that will directly benefit the Cardiac department.  So far this year we have put £5k towards part sponsoring a cardio probe to be used with an Echo machine which is a crucial piece of equipment in the diagnoses of heart conditions.  We have also nominated a portable echo machine with funding required of £80,000 as our next piece of equipment to part fund.  Both of these help to diagnose heart conditions within children and are simply a vital piece of equipment.  We know from Stanley's experiences how often they are used, and how important these items are.

Brad
Posted by Unknown at 10:49 No comments:

To make your own justgiving page for Stanley's Brighter Futures Fund at GOSH:
justgiving.com/remember/29908/stanley-mclean

To donate to Stanley's Brighter Futures Fund at GOSH:
justgiving.com/stanleymclean 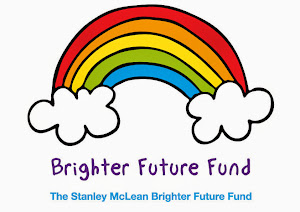 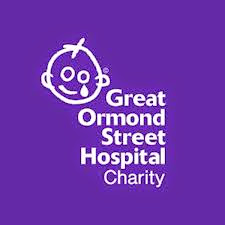